What is a Computer? Computer Definition 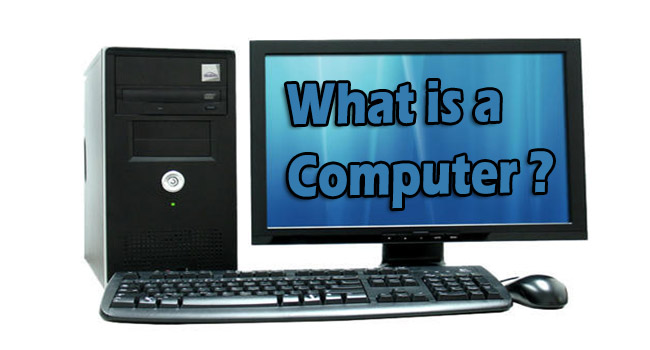 The concept of a computer that generally refers to a desktop computer or laptop, however, many electronic devices use computers to operate like telephones mobiles or smartphones, tablets, or iPads. In general, a wide range of entertainment products such as televisions, video game consoles, music, and video players, household appliances, cars, etc.

What is a computer?

It is a programmable machine that executes a series of commands to process the input data, obtaining convenient information that is subsequently sent to the output units. A computer is physically made of many integrated circuits and various support, extension, and accessory components. These circuits can jointly perform various tasks extremely fast and under the control of a program. These programs are called software.

The computer is made of two necessary parts. One is the hardware, which is the physical structure e.g. electronic circuits, cables, cabinet, keyboard, etc., while the other is software, which are nonphysical parts e.g. programs, data, information, documentation, etc.

The hardware is physical devices that are designed to execute specific functions which are interconnected to form an integrated system, this system of prescribed and programmed functions of each of the components are the software.

Software is a series of programs designed to make parts of the computer work in an integrated way. The pc or personal computer is designed to be operated by an individual person who can take advantage of the use of various support programs designed to develop specific tasks such as office work, whether calculations, development of text documents, presentations with graphics, communication via email and social networks, etc.

Currently, there are multiple programs designed to execute specific actions in various areas of the industry, which are operated by people on computers which can be personal (used by a single person) or supercomputers or high-performance computers (operated by multiple people), which are a set of very powerful computers linked together to increase the power of work and achieve the greater performance of very specific functions and tasks.

A desktop computer is a personal computer that is designed to be used on a base such as a desk primarily or work table and is characterized by having multiple independent components connected. To this type of computer, you can add multiple components and extra accessories that can be connected directly to the motherboard.

A laptop is a compact personal computer designed in one piece and of low weight that can be easily transported and is currently the most popular type of personal computer for its practicality and in some models for its low cost.

How does a computer work?

A computer is a machine that has at least one central processing unit (CPU), the main memory, and some peripherals or input and output devices. The input devices allow to feed data, the CPU is responsible for its processing (arithmetic-logical operations), and the output devices communicate them to the external media. Thus, the computer receives data, processes it, and shows resulting in the form of information. It can then be interpreted, stored, transmitted to another machine or device, or simply printed; all at the decision of an operator or user and under the control of a computer program.

In fact, computers perform a wide variety of tasks, this makes it a general-purpose machine. It opposed to a calculator because it only can do to calculate limitedly. Thus, based on input data, it can perform operations and problem-solve in the most assorted areas of human effort e.g. administrative, scientific, design, engineering, health, communications, etc., including more issues that they would not directly solvable or possible without your intervention.

Basically, the capacity of a computer depends on its hardware components, while the diversity of tasks lies mostly in the software that it supports running and contains installed.

The computer can be of two types.

So that in general terms, when you speak of “the computer” you are referring to a digital computer. There is mixed architecture, called hybrid computers, these are also special purposes.

In World War-II, mechanical analog computers were used, oriented to military applications. At the same time, the first digital computer was developed, which was called ENIAC. It occupied a huge space and consumed large amounts of energy, equivalent to the consumption of hundreds of current computers (PC).

Modern computers are based on integrated circuits, billions of times faster than the first machines, and occupy a small part of your space.

Simple computers are small enough to exist on mobile devices. Laptops, tablets, netbooks, notebooks, ultrabooks, can be powered by small batteries. Personal computers in their various types are signs of the so-called information age and are what most people think of as a “computer.” However, embedded systems also constitute computers, and are found in many current devices, such as fighter jets, smartphones, industrial robots, MP4 players, and toys, etc.

Far from being the computer is the evolutionary result of ideas of many people related to areas such as electronics, mechanics, semiconductor materials, logic, algebra, and programming.

Components of the computer:

The basic model of von Neumann architecture on which all modern computers are based, the technologies used in digital computers have evolved greatly since the appearance of the first models in the 1940s. Although the Neumann Architecture, published by John von Neumann in the early of 1940s, attributed to John Presper Eckert and John William Mauchly.

The Von Neumann architecture describes a computer with four main sections: the arithmetic logic unit, the control unit, the primary, main, or central memory, and the input and output (I/O) devices. These parts are interconnected by conductor channels called buses.

The Arithmetic-Logic Unit (ALU) is the device designed and built to carry out elementary operations such as arithmetic operations (addition, subtraction), logical operations (AND, OR, NOT), and comparison of relational operations. This unit is where all the computational work is done.

The processors can consist of in addition to those previously mentioned, other additional units such as the floating-point unit.

Main memory, known as Random-Access Memory (RAM), is a set of storage cells organized in such a way that they can be directly accessed numerically (memory address). Each elementary cell corresponds to a bit or minimum unit of information. It is accessed by 8-bit sequences, which makes up one byte. An instruction is a certain operational action, a command that indicates to the ALU the operation to be carried out (addition, subtraction, logical operations, etc.). The bytes of main memory store both the data and the command codes that are needed to carry out the instructions. The memory capacity is given by the number of cells it contains, measured in bytes (and their multiples). The technologies used to manufacture the memories have changed a lot; from the electromechanical relays of the first computers, tubes with mercury in which acoustic pulses were formed, arrays of permanent magnets, individual transistors to today’s integrated circuits with millions of cells on a single chip. They are subdivided into static memories (SRAM) with six integrated transistors per bit and the much more widely used dynamic memory (DRAM), with one transistor and one capacitor integrated per bit. RAM can be rewritten several million times; unlike ROM, which can only be recorded once.

The three basic units in a computer, the CPU, memory, and I/O subsystem are communicated with each other by communication buses or channels:

Address bus, to select the address of the data or peripheral you want to access.

Control bus, mostly to choose the process to be carried out on the data (mainly reading, writing, or modification).

The data bus, where the data circulates.

Other data and concepts

In modern computers, a user has the impression that computers can run several programs “at the same time”, this is known as multitasking. Actually, the CPU executes instructions in one program and then after a short time, switches execution to a second program and executes some of its instructions. Since this process is very fast, it creates the illusion that several programs are running simultaneously; you are actually dividing the CPU time among the programs, one at a time. The operating system is the one that controls the distribution of time. Really simultaneous processing is done on computers that have more than one CPU, giving rise to multiprocessing.

The operating system is the program that manages and administers all computer resources, controls, for example, which programs are executed and when manages memory and access to I / O devices, provides interfaces between devices, even between the computer and user.

Currently, some widely used programs are usually included in the distributions of the operating system; such as Internet browsers, word processors, e-mail programs, network interfaces, movie players, and other programs that previously had to be obtained and installed separately.

The first large and expensive digital computers were used primarily for scientific calculations. ENIAC was created for the purpose of solving the ballistics problems of the United States Army. The CSIRAC, the first Australian computer, made it possible to assess rainfall patterns for a large hydroelectric generation project.

With the commercial manufacture of computers, governments and companies systematized many of their data collection and processing tasks, which were previously performed manually. In academia, scientists from all fields began to use computers to do their analyzes and calculations. The continuous decrease in the prices of computers allowed their use by smaller and smaller companies. Businesses, organizations, and governments began to use large numbers of small computers to perform tasks that were previously done by large and expensive mainframe computers.

With the invention of the microprocessor in 1970, it became possible to make ever-cheaper computers. The microcomputer was born and then the PC appeared, the latter became popular for carrying out routine tasks such as writing and printing documents, calculating probabilities, performing analysis and calculation with spreadsheets, communicating via email, and the Internet. The wide availability of computers and their easy adaptation to the needs of each person have made them use them for a variety of tasks, which include the most diverse fields of application.

At the same time, small fixed-programming computers (embedded systems) began to make their way into applications for the home, automobiles, airplanes, and industrial machinery. These integrated processors controlled the behavior of the devices more easily, allowing the development of more complex control functions, such as anti-lock braking systems (ABS). At the beginning of the 21st century, most electrical appliances, almost all types of electrical transportation, and most factory production lines were powered by a computer.

Perhaps the most interesting “descendant” of the cross between the concept of the PC or personal computer and the so-called supercomputers is the Workstation or workstation. This term, originally used for equipment and machines for recording, recording, and digital sound treatment, now refers to workstations, which are high-capacity computing systems, normally dedicated to scientific calculation tasks or real-time processes. A Workstation is, in essence, a personal work computer with high computation, performance, and storage capacity, superior to conventional personal computers.