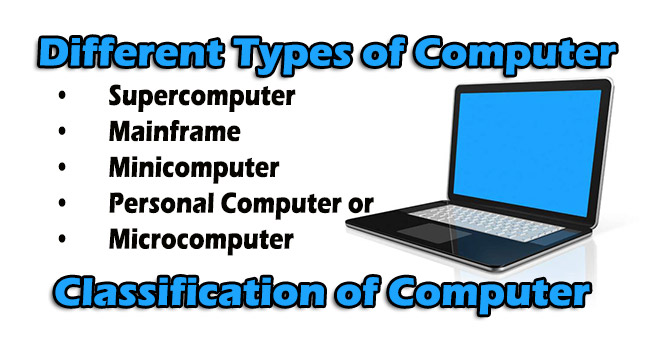 As you know about the name of a computer but it is well to know about the different types of computer. A computer is classified on the base of power, function, and purpose. A computer is an electronic machine that accepts raw data as input, process it according to the instructions, and calculate results/information to the user according to the given instruction. It is not a human but it is a machine for doing some operational. A computer can store information and the user can retrieve it again and again.

Although a computer can help you to perform complex jobs and solve complicated problems, therefore it is generally classified or categorized as follows.

Different Types of Computer Based on Power and Size:

Different Types of Computer Based on Function and Operation:

Different Types of Computer Based on Purposes and+ Uses:

Classification of Computer Based on Power and Size:

A supercomputer is the most powerful multi-user and fastest computer in the world. It calculates trillion million instructions per second up to 14 accurate decimal places. Therefore, it is called “Number Cruncher”. Multi CPUs are working together on this computer.

It is very expensive with normal costs of several million dollars. It is made for general purpose to solve the problems of Scientists & Engineers and is referred to as “FORTRAN ENGINES” means FORmula TRANslation because FORTRAN language is commonly used by scientists and engineers.

A supercomputer is considered to be the main tool for the reproduction of nuclear weapons denotation, aerodynamic flows, and global weather patterns.

Mainframe Computer is an expensive and a multi-user / multiprocessing computer capable of supporting more than hundreds or thousands of users at the same time. These computers have large size and memory and more powerful than Minicomputer. These computers have high-speed data processing power and can process over millions of arithmetic expressions per second.

A mainframe computer is expensive and is used by large organizations or industries for significant jobs and data processing. For computerization of a huge business, Universities, Banks, Scientific Laboratories, National & International Markets, etc. it is usually filled with a large room because many peripheral, input, output devices can be attached to it.

The Mainframe Operation System can support multiprogramming, time-sharing and virtual memory; therefore it is used as Server in a network with many workstations. Many of the terminals can be attached to a Mainframe computer to run different programs.

Terminal: It is a simple monitor along with input devices (keyboard and mouse) connected to the server for input data and to show results while processing occurs on the server.

A Minicomputer is a multi-user / multiprocessing computer capable to handle 10 to 200 users simultaneously. These types of computers have a medium size, small memory and more powerful and expensive than Microcomputer. Minicomputer contains one or more processors, support multiprocessing and tasking. They are smaller than Supercomputer and Mainframe computer, but more powerful than personal computers and workstations. Multiple Input & Output devices can be attached to them and used in Networking.

It is a single-user computer based on a microprocessor/microchip inside. It is designed for one person, therefore, it is called a personal computer. These Computers are small in size, small in memory, and less expensive. Many input and output devices can be attached to it. The microcomputer can also attach with Mainframe Computer through a network. It is generally used in home, offices or any working place for web surfing, sending an email, type documents, database, photo editing, and entertainment like playing music or games. It is further classified into the following categories.

Desktop Computer: a computer that can easily be accommodated on the table.

Laptop Computer: a computer that can easily be placed in a lap.

The Workstation is a terminal or a single-user computer that is connected to a network (with a mainframe or supercomputer) and more powerful as compared to microprocessors.

Classification of Computer Based on Operation:

Now a day analog computer is using for Engineering and Scientific works. In Oil Refinery it measures flow and temperature of the oil. They are also used in Papermaking and the Chemical Industry.

The output of the analog computer is generally in the form of reading. These computers are used where data can be measured directly from the measuring device.

Those Computers which accepts data in a digital form and provide us information in the same format. It measures digital quantity data and works based on binary digits i.e. 0&1.

Accounting machine and Calculator are common examples of a Digital Computer.

Those Computers which accepts data in digital form and provide results/ information in analog form and vice versa”.

Hybrid Computers have the characteristics of both Analog & Digital Computers and measures both analog and digital quantities. Hybrid Computer has a process with the speed of analog and precision of a digital computer. They are used for a special purpose and are designed to perform special task e.g. ECG machine.

Hybrid Computers are also used in the Air Defense System, and in laboratories for the preparation of medicines.

Classification of Computer Based on Purpose:

Types of computer which has been manufactured for specific tasks are called Special Purpose Computer. These computers are also known as “Dedicated Computers” because these are designed for special jobs. In other words, they are designed to handle specific problems, e.g. control of traffic lights and in Defense System. A set of instruction or programs is fed to them. As they perform only one type of job so they are very fast.

Types of computers that can perform all types of jobs and can run multiple programs are called General Purpose Computers.

These computers can perform a variety of jobs, e.g. documentation, accounting, playing of games, making of graphics and doing of arithmetical operations. General Purpose Computers are versatile, but they are slow in processing and less efficient as compared to Dedicated Computers.